The mani I have to show you today features three great polishes and an awesome stamping plate from It Girl Nail Art. 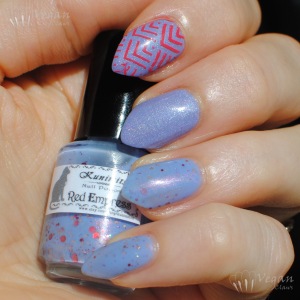 On my index and middle finger are two coats plus top coat of Picture Polish Eerie, a lilac “bijou holo” i.e. scattered holo with multicoloured glass flecks. On my ring and pinkie, three coats plus top coat of Kunimitsu Nail Potions Red Empress, a great bluish lilac crelly with pink shimmer and various glitters in red, pink and copper. 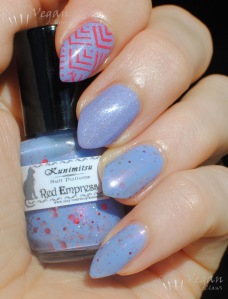 I added stamping on the index finger using Colour Alike stamping polish “A Sunset” and an image from It Girl plate 101 from their recently released first set of three stamping plates.

I even took pictures of my right hand, that’s how much I loved this mani! 😉 So, here are (entirely too many) random pics of this on both hands! 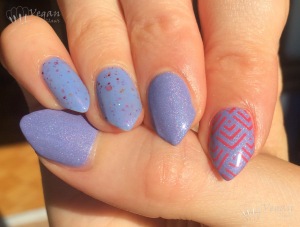 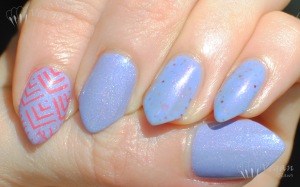 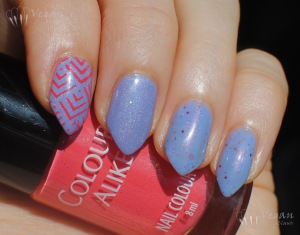 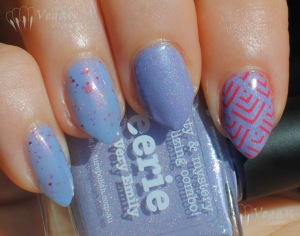 Here’s a picture of the It Girl plate. These are rectangular plates 6cm by 12cm long, and the images are quite large so no worries about them being too small for long or large nails. I’m going to be having a giveaway soon for one of the It Girl plates along with some other goodies so stay tuned for that. 🙂 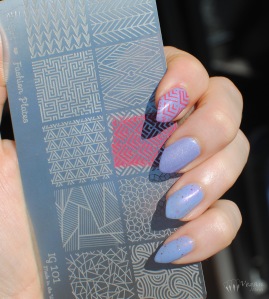 Black Dahlia Lacquer Mountain Laurel is a really nice lavender holo with subtle blue-purple glass flecks. It has a great formula and I used two coats plus top coat for this mani. With flash: 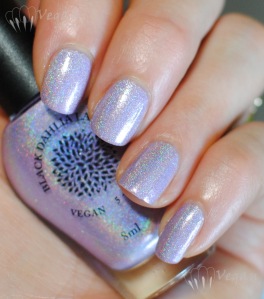 A few odds and ends

A few random things, some of them pretty old photos! In reverse chronological order… 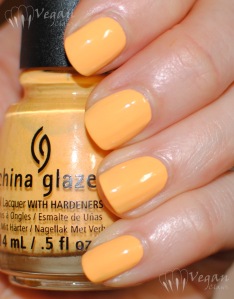 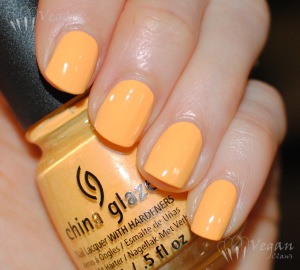 IndiePolish Spring Lilac, two coats, plus two coats topcoat (the formula was a little thick so the glitters got a bit lumpy). 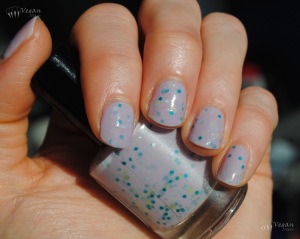 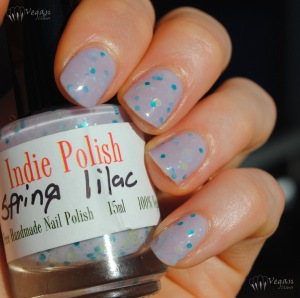 OPI Do You Think I’m Tex-y with a jelly sandwich accent nail. I *think* the iridescent glitter in the jelly sandwich was Butter London Tart With a Heart but I’m not 100% positive!

And of course, I can’t post a polish with Tex in the name without posting a picture of handsome Big Tex!

More old pics that I haven’t posted before… I think all of these photos are under the Ott Lite except for the last one. 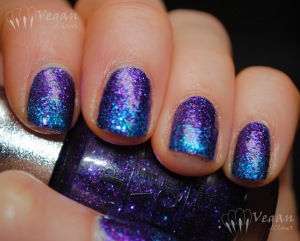 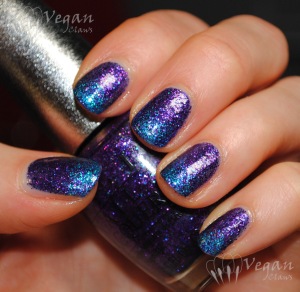 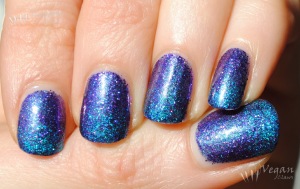 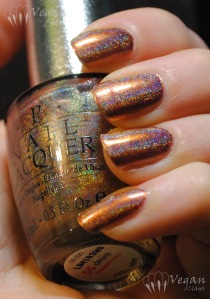 Sephora by OPI Rumba Romance with half moons in Orly Chocolate Martini.

Milani Golden Lilac (the one with gold shimmer) and Kleancolor Gorgeous Surprise (the one with blue shimmer). I don’t remember what the base colour was that they’re layered over, unfortunately. 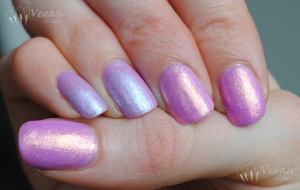 I’ve got a quick post for you today featuring two LA Colors polishes.

Illusion is a periwinkle blue creme with a slightly jellyish quality to it, and the accent colour, Wisteria, is a warm lilac creme with hidden shimmer. Two coats each plus topcoat, and I applied dots of Illusion to the accent nail using a dotting tool. 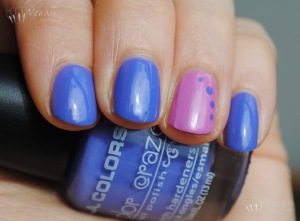 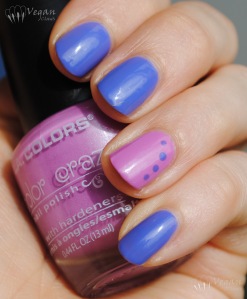 I’m excited today to show you two of the five polishes I have from Ruby White Tips’ Batworld collection! The creator donates half of the proceeds from polishes in this collection to Batworld, a Texas no-kill organization that does rescue, rehabilitation, and sanctuary work for orphaned and injured bats.

Here are the five polishes I have from the collection. There has since been a sixth one released (which of course I just had to order as well! ;)). I’ve decided to split the swatches into two posts because I have so many pictures. Today I’ll show you Boo2 and Peekaboo!

Each polish in the collection is named after one of the bats who are permanent residents of the sanctuary (because of injuries that didn’t heal well enough for them to be released safely). Here are the real Boo2 and Peekaboo who inspired these two polishes: 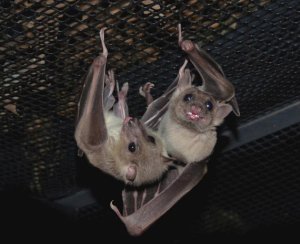 Boo2 is the one who is looking at the camera and comforting Peekaboo in this photo. They say that he is Peekaboo’s boyfriend. 🙂

And here is the nail polish named after Boo2:

It’s a great “blurple”/deep periwinkle shade with a warm purple shimmer and holo microglitter, and is kind of hard to photograph accurately, so I’ve included photos in several different lighting situations. These first few are in partly sunny light. Two coats of polish.

There isn’t any top coat in the first few photos, and it dries to a satiny finish. There is also a bit of texture from the holo microglitter, so it’s probably best with a good thick topcoat. 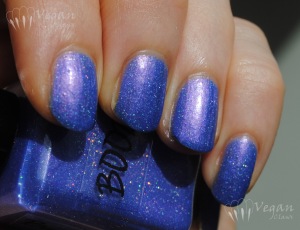 The next group of photos are under the light of a halogen lamp. The latter of these ones (the ones with topcoat) are the most colour accurate of all the photos, I’d say, and show off the warmer purple shimmer the best. 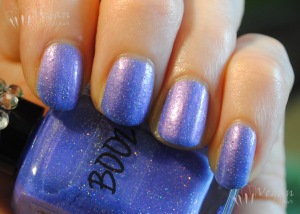 The rest of the photos have one layer of topcoat added. I think next time I’d use two layers, or a thicker topcoat. 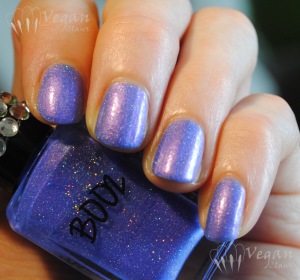 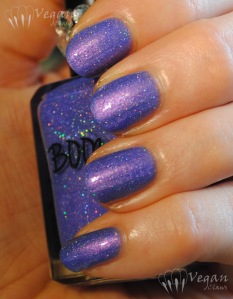 And the last two are in shade/overcast light. It isn’t quite as blue in real life as it looks here.

Anyway, this is such a great shade of purple/blue! 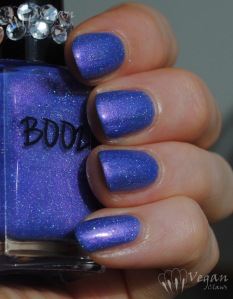 Next up is Peekaboo! Peekaboo is a pinkish lilac shimmer with micro holo particles, sparse medium holo hex glitter, and some very small iridescent shards scattered throughout the polish. 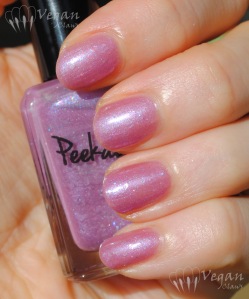 Peekaboo has a more sheer formula, and this is three coats. I love it like this but I think it’d also look great layered over a similar creme, such as Zoya Perrie, for a more opaque look.

No topcoat in these photos; this one dries shinier than Boo2 does.

It also has smooth holo particles rather than the slightly bumpy microglitter (the larger hexes and small iridescent shards in Peekaboo, though, do add their own small amount of texture). 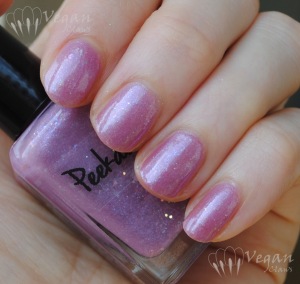 I love both of these! Stay tuned for swatches of the other three polishes!