Archive for the ‘Jordana’ Category

I’ve been tempted by these Nicole by OPI “Roughles” textured polishes that came out this spring, but didn’t want to spend full price on them (10.99 each here in Canada!). Since they seem to be starting to disappear from some of the drugstores without being put on clearance I decided to try my hand at frankening something similar. 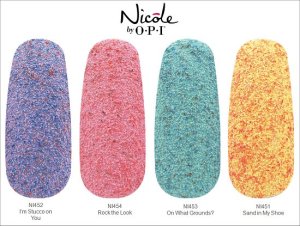 Here are the ingredients I used to try to dupe the yellow one, Sand in My Shoe: mostly Color Club Coastline (white texture) with Jordana Yellow Madness (yellow texture) added, along with one drop of the green China Glaze In The Rough and three drops of the orange Toe-tally Textured, and one small scoop of tiny coral-pink matte glitter.

I think maybe it could use a touch more of the matte coral-pink glitter, but overall I’m pretty happy with it! 😀 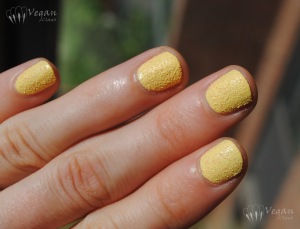 I’m really liking textured polishes, but at first I wasn’t too sure about the ones that aren’t glittery and sparkly. I think they’ve grown on me, though! 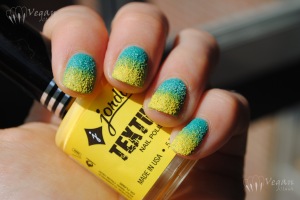 These two are by Jordana, which is made by the same company that makes Milani. These seem to be the exact same polishes as Milani’s Texture Creams, only they were a couple dollars cheaper so I got these instead!

I started out with Wild Shore, a teal green creme with texture. I can’t remember whether I did two or three coats, and I don’t seem to have written it down. I do remember having a little trouble with application, as I found these really need thin coats in order to get the best finish (so I’m thinking I probably ended up doing three thin coats), and at first I was making my coats too thick. Then I was trying to find the right balance between thin coats but having enough polish on the brush. 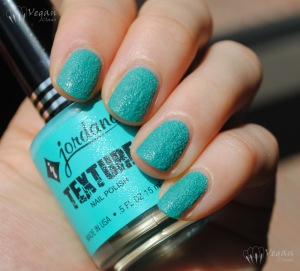 But I’m really happy with the way it turned out! I then sponged on a gradient using Jordana Yellow Madness along with Wild Shore. 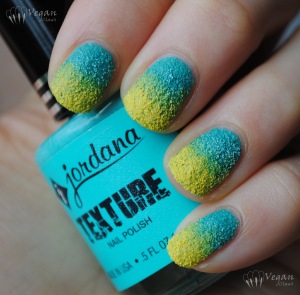 I love the combination of yellow and turquoise! And the sponging really brings out the texture of these polishes, since the sponging technique leaves less polish on top of the texture particles. Looks really sugary and crystalline!