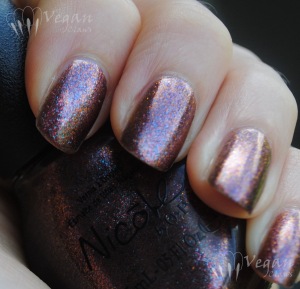 This amazing polish is Nicole by OPI Just Busta Mauve, which I haven’t seen for sale here in Canada (it’s supposed to be exclusive to Target stores and we don’t have those yet), but I was able to get with the help of someone having a blogsale! (Thanks again, Amy! :))

Shown are three coats plus a layer of topcoat; the polish is slightly sheer to allow the duochrome iridescent shimmer to show through.

I recommend waiting a minute between coats to avoid any balder spots near the cuticle, but other than that the formula was good! 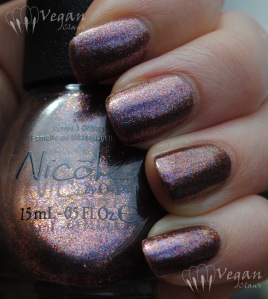 These photos are in natural light, various degrees of shade/partial sun.

I love the finish on this polish! As you can see, there are a whole lot of colours in the flecked/foily particles: mauve, blue, copper, pink, plum, and a lovely warm golden orange colour shift at an angle. It’s the kind of polish that doesn’t really belong to just one colour family!

There are two other polishes in this release that have a similar finish, and I’ll be posting those at a later date. 😀