Today I have another of the China Glaze New Bohemian polishes to show you. This is Want My Bawdy – groan-worthy name that looks like something OPI would come up with, but beautiful indigo blue shimmer with slight purple duochrome!

The duochrome on this one is very mild; it’s the least duochrome in the collection, but there is a bit of a purple flash at an angle in the right light, as seen in the above photo.

The formula was thin and sheer, and I got some bald spots in my application from not waiting long enough between coats (as often happens, I was rushing to get my swatching done before the sunset!). These swatches show three coats of the polish, no top coat. 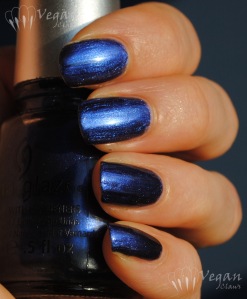 In the next two photos I swatched it over black as I usually do with duochromes (one coat of Want My Bawdy over one coat of Kleancolor Black), but it didn’t really change the look of this one much. It mostly just makes it appear more blackened around the edges. This next photo is with flash (all the others are in sunlight).

Despite the very subtle nature of the duochrome in this polish, I’m personally not disappointed with it! It’s a beautiful glowy blue, and that hint of purple flash that comes out occasionally is just an added bonus. 🙂 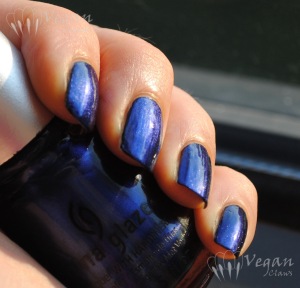