Today I have a skittle mani to show you, using the polishes from Zoya’s Beach collection for summer 2012.

Thumb to pinkie are Zoya Reagan, Wednesday, Shelby, Arizona, and Lara. The bottle I’m holding is Zoya Tracie, the only non-creme polish from Beach.

I plan on doing comparison posts for all of these polishes later, so I’m not going to talk much about the formulas right now. These swatches were all two coats, though. 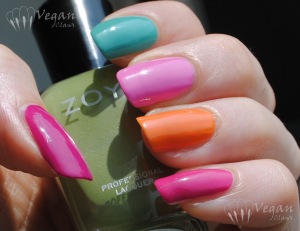 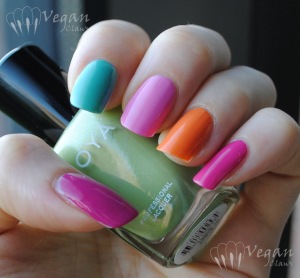 Later on, I added a coat of Sally Girl Way2Disco, a blue-teal iridescent glitter (shown here in the shade, since the sun was not cooperating):

Stay tuned for comparisons of the Beach (and Surf, the other half of the collection!) polishes to other similar polishes in my stash! I hope to get those posts started in the near future.

Color Club Frills and Cult Nails Feel Me Up