Cult Nails I Got Distracted

Today I’ve got another polish from Coco’s Untamed collection by Cult Nails. The polishes in this collection were all designed by Coco, the daughter of Cult Nails’ founder! 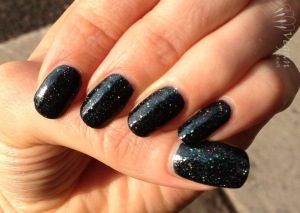 I Got Distracted is a black jelly with small holo glitter and medium green glitter. Maria of Cult Nails shared the family joke behind the name of this shade – “I got distracted” is Coco’s classic excuse for anything she was supposed to do but didn’t, used so often that it just had to make an appearance among the polish names. 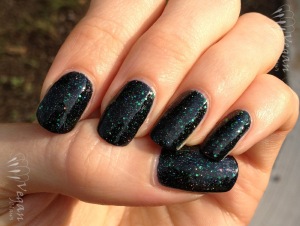 Shown are two coats; the formula was fairly thick but I found it easy to apply using thick coats. I almost didn’t need the second coat, as this polish is quite pigmented. It dries gritty from all the glitter so a good thick topcoat is in order. In these sun photos, I had on two layers of Cult Nails topcoat: one that I applied right after the polish, and another the following morning. The sun photos were also taken with my phone, which probably has something to do with the reason that the watermark ended up going on sideways! haha! 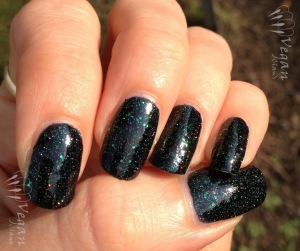 The rest of the photos only have one layer of topcoat and were taken just after finishing the mani. In the shade: 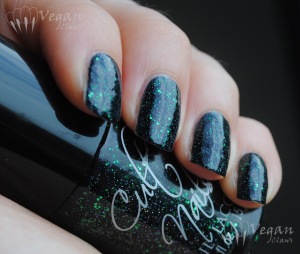 And finally, a couple of photos that show off the glitter a bit better! Under the Ott Lite: 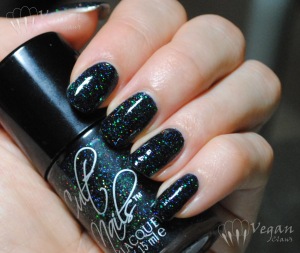 Comments on: "Cult Nails I Got Distracted" (2)