Orly Androgynie is from their Holiday 2011 collection. It’s a black jelly with holographic and gold microglitter and larger hex iridescent glitter that combines with the black base to reflect colours that are light but not pastel. It’s kind of similar to Sephora by OPI’s 212-Sephora, but with multicoloured hex glitter instead of flakies.

I love the look of this polish. Its formula wasn’t the greatest though; there’s not enough suspension base in it so the glitter sinks to the bottom. I found that standing the bottle upside down overnight before I used it, as well as standing it upside down between coats of polish, helped a lot with that and I was able to get a proper amount of glitter onto the nail. The formula also seemed a bit thick-yet-runny at the same time. I can’t remember if this was 2 or 3 coats, but whichever it was it’s with topcoat. The end effect was worth the hassles! These first two photos are in natural overcast light.

Blurred to show the sparkle:

And finally, the full mani in the sun: 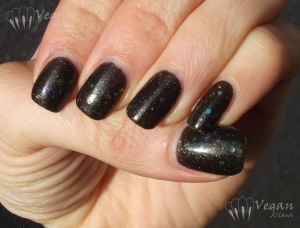 Comments Off on Orly Androgynie