I recently picked up a few polishes from the LA Girl Rock Star collection; Electric Guitar is the first one I’ve tried. I wasn’t expecting to love it as much as I do – not that I didn’t think I would like it, but I wasn’t really expecting to be wowed by it like I am. These photos show three coats in direct sunlight. The formula was great and easy to apply, and dries fairly quickly.

It’s a warm golden orangey foil with holographic micro glitter and larger hex iridescent glitter. I really like it on my skin tone; it seems fairly subtle until you see it up close. This slightly blurred shot shows off the iridescent glitter a bit better if you click on the larger version, but still doesn’t really do it justice. 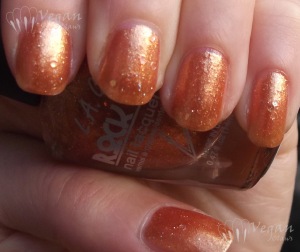 Tonight I did my FW’s nails (long story but she and I call each other “FW”), and she wanted leopard nails. I practised first on top of my Electric Guitar mani and I think it turned out quite well! The spots were made freehand using Zoya Penny and Zoya Raven. The following photos are all taken under the Ott light and look quite a bit cooler toned than in real life.

She chose Milani French Toast as the base for her leopard nails. Here are the two leopards! (I don’t know why my fingers are always so much redder than my actual skin tone, but this photo really makes it apparent, yikes.)

Detail of my FW’s leopard nails: 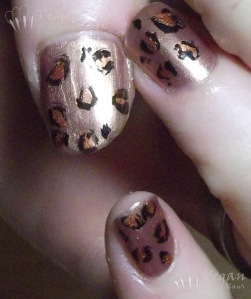 This first foray into leopard print nails was a lot of fun!