The Emperor by Black Cat Lacquer is from their Tarot collection. The name is also one of the (many, many) nicknames of one of my cats – SP, aka Emperor Spee. 😀

The Emperor is a dark brown creme-based holo with additional irregular-shaped micro holo shards. I had seen them described as both ‘flakes’ and ‘shreds’ so I wasn’t sure if they were flakes of true holo particles (smooth) or if they were more like glitter shards (slight texture that needs a topcoat to smooth), so I wanted to mention that it’s the latter, in case anyone is uncertain like I was. Here is the Emperor under Ottlite:

I used two coats plus top coat. The accent nail has a base of Zoya Codie with a half moon in Zoya Nina. Under halogen light: 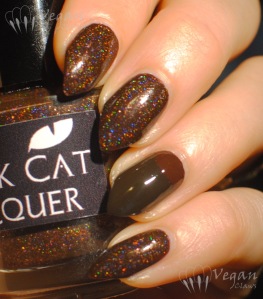 Love this deep brown combo, even if in most lighting the contrast between the two colours on the accent nail wasn’t as strong as I’d thought it would be.

And here are some pics of my feline Emperor Spee; he’s a little black cat and with the bright sunlight bringing out the brown highlights in his fur, The Emperor polish matches him well! ❤