I recently received these three new Soulstice Spa polishes, including their two new greens, for review: Telluride, LA, and Dublin. You can click on any of the photos below to see more detail in the full sized versions.

This bottle shot unfortunately didn’t pick up the golden shimmer in Telluride, but here it is below. 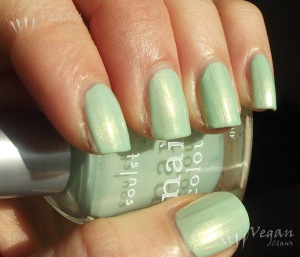 A mint green with golden shimmer, this one is unique in my collection of minty polishes – I’m sure others must exist, but I don’t have any! This one had a fairly thick formula that did give me some trouble – at one and two coats it was a bit streaky over the ridges on my nails, so I ended up using four coats to even everything out for these pictures. Next time I’ll be adding a little thinner and using an opaque base coat, so I’m sure 2 or 3 coats will do. Either way, the colour is great!

Next up is LA, a multicoloured hex glitter layering polish. Here it is by itself, three coats (please ignore the stained nails!).

There are three sizes of hex glitter in this polish, very small, small, and medium, in the colours silver, yellow, green, orange-toned red, blue, and magenta. I love that there is a noticeable amount of yellow glitter, it really makes the polish for me! The formula was good, no trouble with this one. I had to “place” the glitter a little bit to get it evenly distributed, and as with any polish of this type, I held the brush against the inside of the bottle neck for a few seconds to let some of the transparent base drain off to maximize the concentration of glitter on the nail.

Of course, there are a fair number of similar rainbow glitter polishes floating around, including the newly released one by OPI, so I’ll be doing a comparison post with a couple of those later.

Last but not least, Dublin! This is a deep, shimmery velvety green, just gorgeous. The formula was good and this one is nearly a one-coater. I used 2 coats for good measure but you could probably get away with one if you’re careful. I got a few bubbles in it, which you may be able to see in the first picture; I think that was mainly because I used Nubar Nu Nail as a base coat under it since I was planning to keep it on as my manicure after taking the photos, and didn’t let things dry long enough between coats.

I then added two layers of LA on the ring finger as an accent, and finished with Poshe top coat which completely eliminated the bubbles (love that stuff – so smooth and glassy!).

Just for fun, another photo since a piece of glitter caught the light so well!

These polishes dried fairly quickly. I really like all three shades. I asked for greens, and I’m sure not disappointed! I love minty greens, and polishes with golden shimmer, and dark greens too, so these are great. I’m really enjoying my Dublin mani so far, it’s beautiful to look at!

Disclosure: the polishes in this post were provided to me by Soulstice Spa for review. Opinions expressed are my own.