Today I have the three recently released Glitter Gal holos for you. Glitter Gal is an Australian brand known for their line of holographic polishes. These came out in August and I first swatched them then, but wasn’t very happy with some of the photos so I recently redid the ones for Light as a Feather and Frappé. For these photos I used either Nubar Foundation or Zoya Get Even for base coat, as noted on the individual shades, and no top coat. I found that they dried fairly glossy even without top coat. The photos are all taken in sunlight in my solarium. You can click on any of the photos to see more detail in the larger versions. 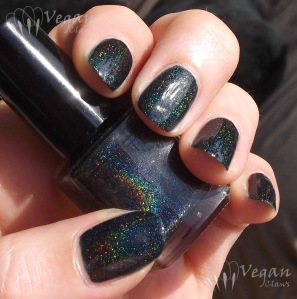 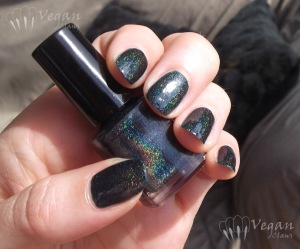 This one is really awesome! A blackened green with a strong holo effect. I only needed two coats for this one. Love it!!! Formula was a bit little bit thick, but not hard to work with. For these photos I had a base coat of Nubar Foundation. It is quite a blackened green, and in some lighting pretty much looks black. I’m thinking of trying it over a kelly-green creme next time…

Light as a Feather

A very pale grey holo. I had the hardest time photographing this one, so I’m including several pictures to give a better idea of the polish, including a couple of blurry ones that show off the holo in the bottle. 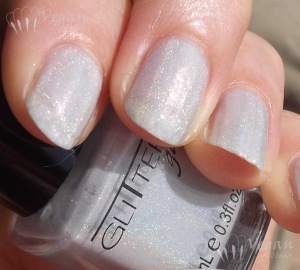 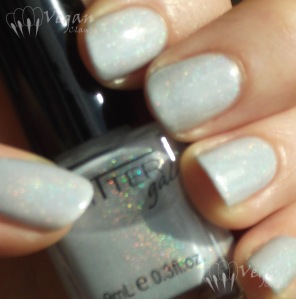 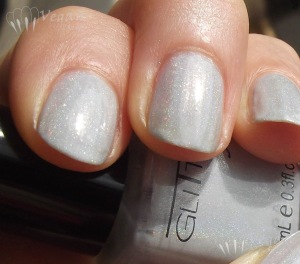 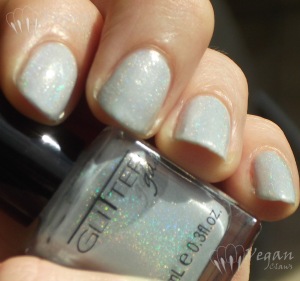 Out of the three, the holo effect is least strong on this one. This one also gave me the most trouble with application. I swatched it here with Zoya Get Even as base coat, since my nails are a bit stained and Get Even has a white tint to help prevent that from showing through. This is three coats (it’s a little sheer, and a bit streaky on the first coat). I found the formula thick and hard to work with. I added several (about 6 or 8?) drops of thinner (Zoya Renew) and that helped. I got some bubbling, but I think that was mainly due to not waiting long enough between coats and the interaction between the basecoat and the polish. I think my Zoya Get Even could use a little more thinner in it too… 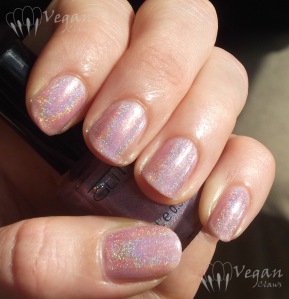 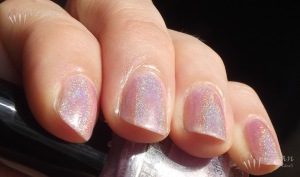 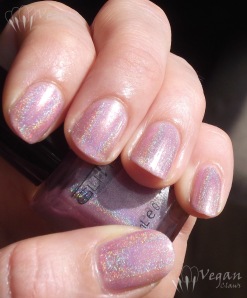 Pink-toned lavender with a noticeable linear holo effect. This one was also fairly sheer (and so, I used Zoya Get Even as basecoat here) and needed three coats. The formula was also slightly thick but much better than Light as a Feather. I added 2 drops of thinner when I swatched this for these photos. Very pretty and feminine colour.

Some general notes on the bottles. The bottles are small as anyone who’s seen GG holos in person knows; they hold 9ml. The brush itself isn’t mini though, it’s a normal length brush (actually longer than some brands like Zoya or Color Club) attached to the small brush handle.

Since the lighter coloured ones were pretty sheer, I also swatched the three polishes over cremes. Here are the base colour I used: Zoya Perrie, Milani One of a Kind, and a grey franken I made from Color Club French Tip and SOPI What’s a tire jack? As you can see in the photo my franken is kind of thick and chalky (due to Color Club French Tip which is one of those whites that is kind of chalky) which doesn’t give the greatest effect when combined with the ridges on that nail, but anyway… The base colours were all two coats except Perrie which was one. 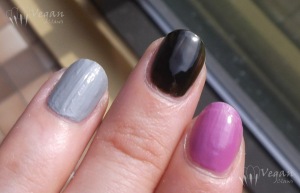 "Underwear" for the holos 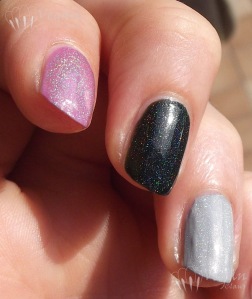 One coat over bases 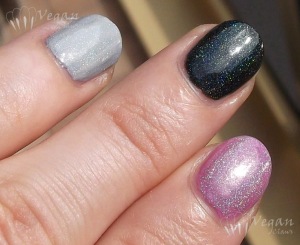 One coat over bases

These photos show one coat of the Glitter Gal holos over their corresponding base colour(s). I like how they turned out, definitely a good way to extend the life of the small GG bottles.

Bottom line: despite the thick formula, these new holos are pretty awesome (especially Lizard Belly!!). Light as a Feather is quite subtle as a holo, but is pretty in its own right. You’ll definitely want some thinner on hand with that one, though! Needing to add thinner to these isn’t such a bad thing in my opinion, that along with using them over a creme will help extend the life of the small 9ml bottles!