Today I have a cat-themed polish for you: Russian Blue by Kunimitsu Nail Potions on Etsy.

Shown in three coats plus topcoat.

I did have to work a little to get the gold dots out of the bottle and placed onto the nail, but it wasn’t too problematic. 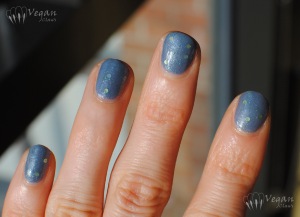 And here is my little blue boy, Julius! Isn’t he handsome? 😀 He is also just about the friendliest little guy imaginable; he loves everyone, including a dog named Fluffy who lives in an apartment down the hall from us.

Julius was adopted from a local shelter where he had been brought as a stray kitten. He has a chronic upper respiratory infection (I had to clean some crusts off one of his eyes to prep him for his photo shoot, in fact). He’s been on every antibiotic in the book over the years but the infection always comes back. On a serious note, it’s really lucky for him that he was adopted by people who would never return him to the shelter for sneezing globs all over their furniture and stuff year after year, because that “shelter” isn’t a no-kill and I don’t know if cats returned for that kind of issue might then be deemed “unadoptable”… 😦