China Glaze Spring in My Step and Valentine’s Day Stamping

Happy Valentine’s Day! This mani started out with a polish I like a lot, Spring in My Step from China Glaze. 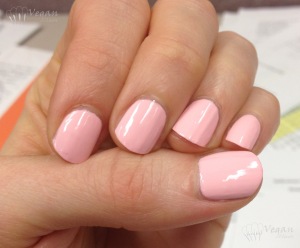 Four coats plus top coat. The four coats are needed, but the formula is thin so it doesn’t seem too thick on the nail, and it dries super quickly. Like, quick enough that this polish and the others I have from this collection (last spring’s City Flourish) are among those I would choose when rushing to cover up naked nails before leaving for work in the morning! I know a lot of people hated the formula of the pastels in that collection, but I loved it! 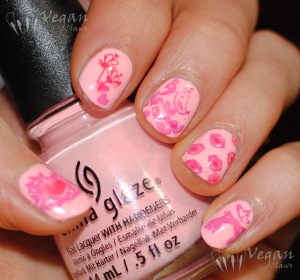 I then added some stamping using Bundle Monster plates BM-H16 and BM-H17. I received both of these plates as gifts from the people at Nail Polish Canada, H16 last year and H17 this year. I think they send them out to regular customers or something. Thanks NPC! 🙂

The polishes I used for stamping were Kleancolor Iridescent Fuchsia (which is a ridiculous name as it’s not in any way iridescent, it’s a straight creme polish!) and Red Alert. Someday I hope I’ll get the hang of stamping so that the whole images will transfer without gaps and smudges 😉

I coloured in a few of the stamps using OPI Guy Meets Gal-veston, a coral pink jelly polish.

Here’s a close up of the thumb stamp, since it didn’t show up very well in the other photos. 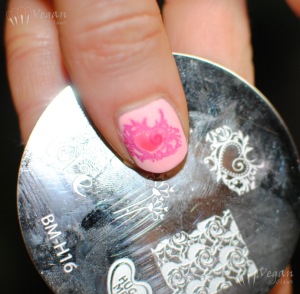 And here’s the right hand – here, I coloured in some of the stamps using OPI Houston We Have a Purple, another jelly from the Texas collection.

Disclosure: the stamping plates used in this manicure were provided free of charge by Nail Polish Canada.

Comments on: "China Glaze Spring in My Step and Valentine’s Day Stamping" (2)