I have another Soulstice Spa polish to show you today! This one is called Troy. 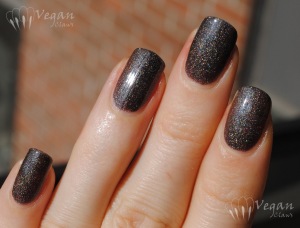 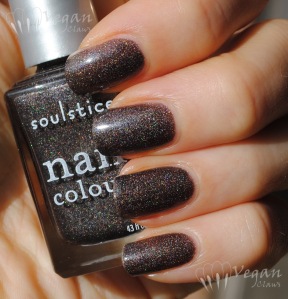 It has a quick-drying formula that applies best with a light touch, using somewhat thick coats and not going over the same spot more than once. Using that technique, I didn’t really have any problems with the application (although the photos are showing a bit of a bald spot on the side of my index that I didn’t notice in real life!). 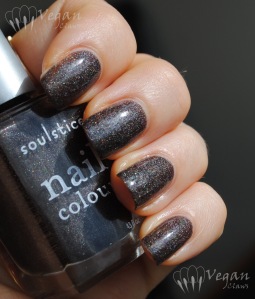 The photos show two coats of Troy. These are true holo particles, not glitter, so it’s smooth even without topcoat. 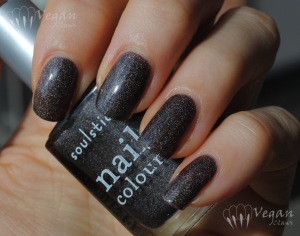 The next two photos are in the shade. 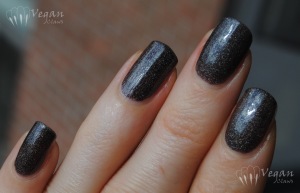 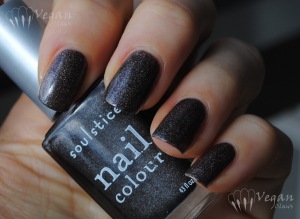 And this last photo is under the Ott light. Subtle in terms of holo, but a really nice quick-drying charcoal! 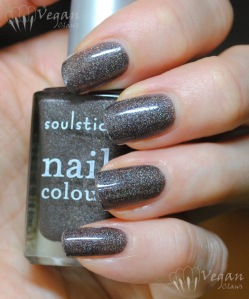 Edit: Prompted by the comment from Derya, here’s a comparison of Troy to OPI My Private Jet (most recent version that is still available in stores) and Color Club Revvvolution. 🙂 (Photos taken under my Ott light this morning.) 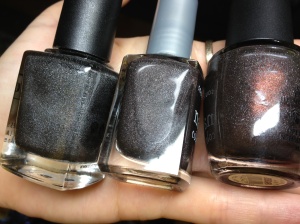 As you can see My Private Jet, the brownish-charcoal scattered holo version, that is, is darker than Troy and has a reddish-brown shimmer flash to it. Revvvolution is more of a true grey charcoal with none of the brown that the other two have. 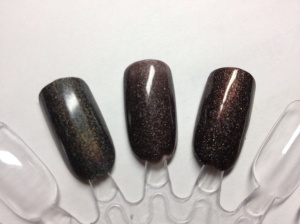 These swatches have two coats of each polish. In addition to being the lightest in colour, Troy was also the sheerest of the three. Revvvolution is the most opaque; it’s nearly a one-coater. It’s also different in that its holo is more linear rather than scattered. My Private Jet’s scattered holo is a bit more apparent than Troy’s. 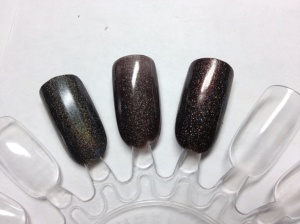 Nicole by OPI If the Blue Fits