If you’ve been to a Sally Beauty Supply store lately you may have noticed that they have five new shades in their Sally Girl line of mini nail polishes. I got a couple of the new ones, including this one called TTFN. And guess what, these new ones actually show the names on the bottles! At the top right of the little sticker along the side. No more cross-referencing the 6-digit number on the sally.com site to try to figure out what the polish’s name is, haha! 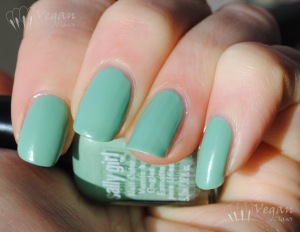 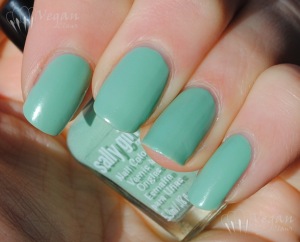 Two coats of TTFN. It was a little streaky on the first coat, but a second thicker coat evened everything out. Colour-wise, this slightly dusty, minty sage green is in between Orly Ancient Jade (which is a tiny bit deeper and brighter), and Misa Catch a Flick (which is a little lighter), as the following photo shows (top to bottom, Catch a Flick, TTFN, Ancient Jade). 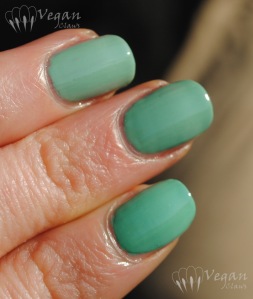 In terms of formula, Ancient Jade had a formula that was thinner than TTFN but was also more pigmented and opaque. Catch a Flick had a formula similar to TTFN, a little streaky on the first coat but evening up at the second.

I also compared a couple of other colours for reference. Thumb to pinky, NYX Girls Algae, much darker and bluer, Orly Ancient Jade, Sally Girl TTFN, Misa Catch a Flick, and Nubar Vogue Vert, lighter and more of a dusty yellow-based sage. 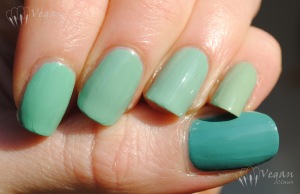 Comments Off on Sally Girl TTFN and comparisons