Today I have a mani from a couple months ago to show you (trying to finish up with my backlog of posts before starting on all the more recent swatches I have!), as well as a fail from the mani that directly preceded it!

The blue is Milani Golden Sea, an older shade, and the metallic/shimmery pastel green on my ring and pinkie is Zoya Dillon from last year’s spring collection. These first two photos are in sunlight taken with my phone.

Golden Sea has a metallic turquoise blue base with some gold shimmer and sparse, hard-to-tell-they’re-holo holo particles. I didn’t even realize that’s what they were until I did the water marble fail I’ll show at the end of the post, and saw them under the halogen light on the very thin film of polish. So, I wouldn’t call it a holo polish but it actually does have these tiny (smooth and flat, non-glitter) sparse holo particles! As always you can click on any photo to get a larger version; I think the particles show best in either the halogen shot below or the first sunlight ones… 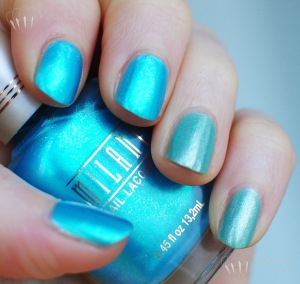 And here is my first ever attempt at water marbling, which did not work at all! It was really cold in the apartment a couple months ago when I tried it; that was probably my first mistake! The polishes dried on the cold water before I could do any marbling. The polishes I used were the two from the mani above plus Zoya Piaf, the shimmery yellow that was also my base polish. The first marble attempt is the one on my ring finger, where the polishes spread out super thin and dried that way. That’s where I saw that the particles in Golden Sea were actually holo. I kind of liked the effect even though I didn’t get to do any marbling, so I tried for another finger, the index, but for that attempt the polishes barely spread out at all so I got this ridiculously thick mess! It doesn’t show that well in the photo, since the angle is pretty much head-on, but it was like a big, thick, lumpy decal that I decided to just put on my nail anyway, haha! Planning to try water marbling again some time, now that the weather is warmer!