Haven’t had much time to edit photos and posts lately… How about another green?

This is a manicure I did a couple weeks ago using the glow-in-the-dark OPI Zom-body to Love, which was released for Halloween 2011, and LA Girl Glitter Addict in Synergy sandwiched on the accent nail. 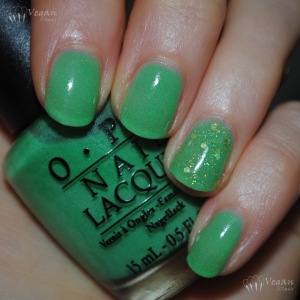