I can hardly believe it’s already June! But since it is, I thought I’d post some photos of Zoya’s polish named June!

June is a light sheer nude beige with pink tones and shimmer.

Here it is in the shade: 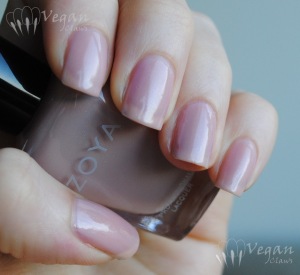 Shown are three coats over a ridge-filling base coat (I think it was Zoya’s Get Even that I used).

In the shade the pink tones really come out.

The formula on this one is nice, not streaky at all; the three coats were only due to the sheerness and not any application issues.

And here it is in the sun:

In the sun the shimmer comes out and the colour seems less pink.

The shimmer is June is made up of tiny little fine shimmery flecks in a sort of opalescent silvery shade that reflect several different colours in the sun, as you can see in the bottle in this next photo.

June is nothing too flashy, but she’s a nice little polish!